There’s a deep undercurrent in my life, that’s always felt meaningful: Bringing people together to connect, facilitating spaces for us all to grow to our potential, by means of presence. Allowing and engaging, actually listening: The sensations, emotions, passions, painpoints and desires – everything that arises.

The reason I’m writing this is to integrate what I’ve worked with until this point in time.

There have been three groups of meeting life as it is that I’ve facilitated. Two of them were church groups, one of them a study group and the other an activity group for the disabled. The one I’m facilitating now is for men and has a more open approach. All ways of speaking about one’s truth and reality are welcomed equally.

What I feel the current group is based on are two primary principles. Singing, and constructive group communication.

We sing at the beginning and at the end of each group. This helps become grounded physically and present to one’s being both mentally and emotionally, in one’s heart.

Constructive group communication was established in the group early on by the group’s previous facilitator, and has been maintained since. The rule we have in the group is that we take turns talking.

I find this simple structure has been crucial for ensuring a safe space for sharing incredibly deep experiences.

I’ve always been interested in flesh-and-bones style psychology and in how people learn (pedagogy), in spirituality and in philosophy and sensemaking, and in poetry. Later on in life I’ve found inquiry, as well as various meditation techniques.

In friendships I’ve had, there’s often been an element of being fascinated by each individual person’s trajectory of growth into what they find meaningful. It’s a commitment to their growth that most people in western culture wouldn’t perhaps think of as the role of a friend, but that of a therapist or a coach.

I’ve practiced listening and counseling as a volunteer helping telephone line worker. I’ve taken up the role of a leadership coach for a student of a leadership course organized by a Lutheran church. I’ve wound up counselling coworkers at workplaces in a tone that went way deeper into the passions of individual coworkers than professional relationships usually require.

All this typically happens as a side effect of being sincere about how I feel about life. A key element of my work is to actually be a friend to those I work with.

Later on, inquiry has also become a service I sell to select individuals. The practice is ideal to me: The format allows me to retain my role as a friend and the relationship as that of equals. Another key aspect of all my work with people is maintaining presence on all levels – mental, physical, and emotional. Both to my own experience on those levels, but also the experience of the other. This has often appeared key in understanding what is actually important about a given situation, and guiding attention.

Meeting people as equals allows them to find their own power and feel more deeply seen than a teacher/student or a counselor/patient relationship would. Yet I typically have something to offer as coach/teacher too. “What to pay attention to?” “Can you notice that’s your inner critic speaking?” And so on. Those I work with tend to commit to the work because of the depth of space that’s available to them for reflection.

Other methods and contexts for meeting life as it is

Once in a while I come across new ways of encountering people as they are and allowing them to construct reality freely.

In addition to inquiry mentioned above, there are three:

Usability testing allows humans to explore digital and other product experiences in a way that helps creators of thos products understand their customer experiences better (Context: IT industry)

Phenomenon-based workshop style learning allows learners of a specific phenomenon or theme in a way that empowers them to construct their own knowledge (Context: Learning institutions, pedagogy)

Circling is a way of exploring experiential living reality of humans freely but in a supported, guided, and facilitated environment. Its cousin authentic relating offers more structured exercises for practicing various facets of constructive human interaction.

I’ve formally worked in the educational field by teaching for a couple of years in a polytech / university of applied sciences, and by getting a vocational teacher degree. In the end the role of a “teacher” even in Finland seems quite system centric and not nearly learner (umh, human) centric enough. The above phenomenon based workshop I mention was a relatively narrow part of the training. If we keep ignoring each other as independent, sincere, humans, is it wonder what our societies keep becoming?

This is why I feel we sort of need to start from the bottom up. It’s clear that the cognition-centric learning paradigms that are currently dominant just won’t be able to stand the test of time. We can’t afford to raise another generation of humans who have lost their sincerity in endless power hierarchies current society is built on. Presence work, a view of human as beings as intellectually, emotionally, physically integrated beings, and genuine connection between humans needs to become the basis for all education. 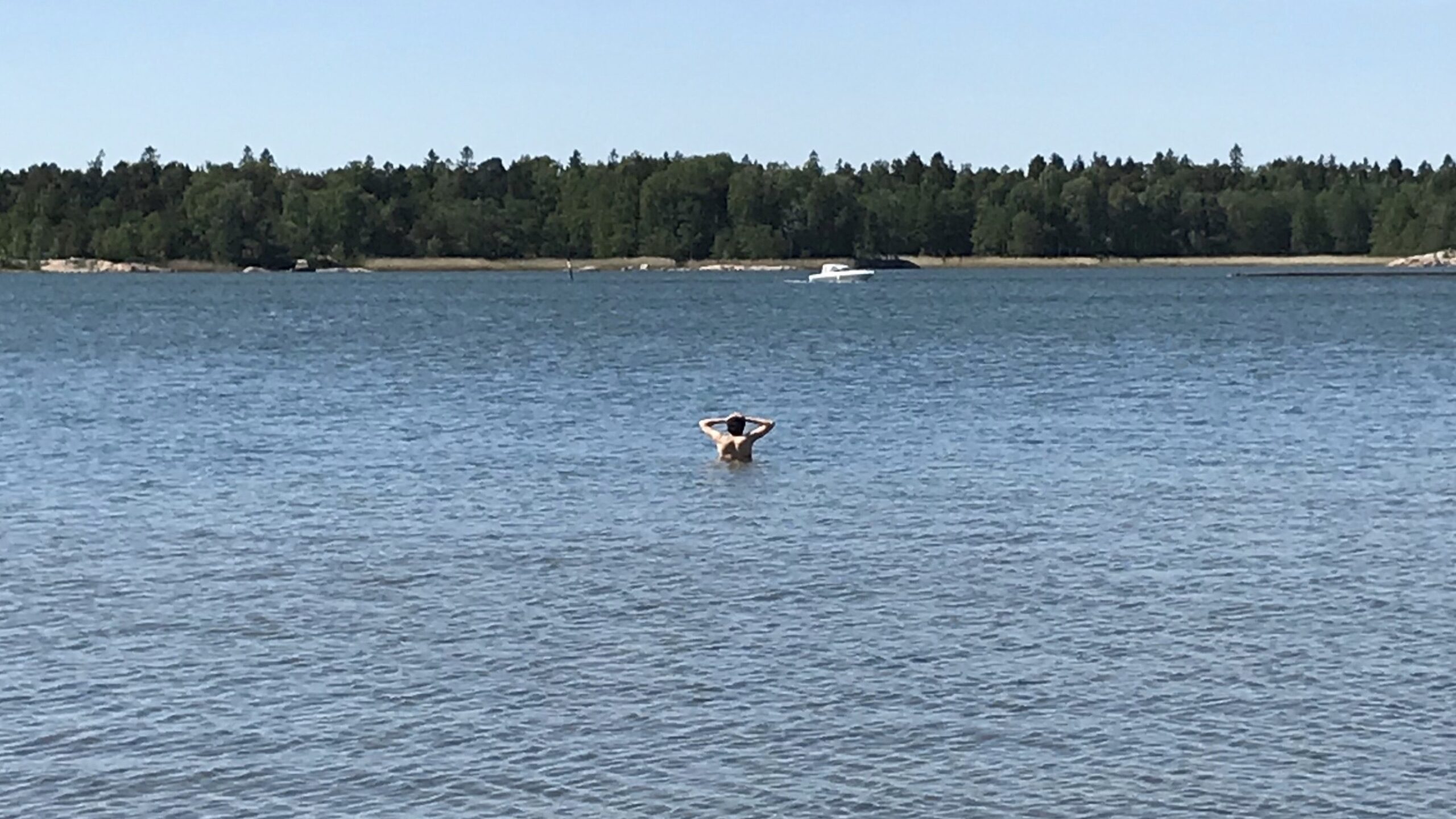 Coronavirus has meant that I haven’t swam in months.

It was warm today in Helsinki. So I decided to go to the beach.

I took a few strokes, but didn’t really swim. I found myself watching the waves coming at me, feeling into what that was like. Feeling the forcefulness of the sea.

Though the air was warm, the sea, not so much. So it worked as a mild cold exposure thing, waking the body up, allowing in the cold, breathing to release and move the warmth within the body.

In the end I faced my back at the sea, watching the beach. I realized that this could be yoga – sitting tall and giving in to the impact of the waves, not doing anything particular with my body. How I still needed to exert force just to stay there.

I’m actually afraid of meditation, I notice. The older I get, it can get more intense to allow it. I’m somehow getting more intense, more willing to use my power in the world. So when I meditate, I have to deal with this forcefulness… within myself.

I’ve been thinking about having impact. I don’t really value impact in and of itself, say, as something that a businessman or employee should do for security or power.

However, there’s another kind of having impact. The Penetrating Reality kind. The kind where you want to have an effect because it means owning up to your own power.

(These two kinds of impact can and do sometimes occur simultaneously, sure.)

Not from a place of using power as a means. But simply being in contact with the life force that is in you anyway. Deciding to direct it in a way that’s… The good you want to see in the world.

And more… Not even what you think you want to see in the world. I’m talking about pushing through reality using your heart.

It is the heart that knows what you really want. Your analytic mind is typically in the way, more or less. Mine is, anyway.

The impact I want to have? Returning myself to my roots of organic creativity. Actually integrating into practical personal reality what I value the most. And then letting that shine forth, inviting others on that same adventure

Our societies are made of structure. Societal structure, which is bound to the structures of our minds, and which our minds are bound to.

There’s nothing bad about structure. It’s necessary, and it provides stability. For the same reason though, structure tends to stagnate.

What are the structures you are integrated in?

Is there a way to work within those structures, those minds, those humans, in a way that allows breathing in life without exerting force? That allows challenging people exactly where those people feel most alive being challenged?

When were you entirely spontaneous the last time, in a space where you felt you really could allow what’s real, right here, right now?

If you wish to practice allowing spontaneity in your right now, you may want to try meditative, open-ended inquiry. I offer classes where we explore this exciting meditation-in-connection in depth.